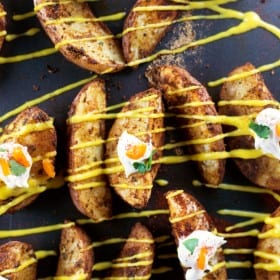 Tried this recipe?Let us know how it was!
Disclaimer: Some of the links above are Amazon affiliate links. This means that we earn a small commission if you purchase anything through them, at no extra cost to you. We only recommend products we love and trust.
« Raspberry Rose Vegan Macarons (Using Aquafaba)
Healthy Tie-Dye Fruit Smoothie »