Unless you’ve been living under a rock, you’ve probably already heard about the amazing Aquafaba. Aquafaba, or as most regular mortals refer to as “liquid stuff that chickpeas and beans are canned in”, is the latest egg-replacement discovery that a bunch of folks on Facebook somehow came up with.  You can make meringue, macarons, and all sorts of other fluffy sh!t with it. I used some to make this Vegan Chocolate Mousse.

To be honest, it’s been a while since I’ve wanted to experiment with Aquafaba (simply because everyone makes it seem so magical). After finally remembering to save some chickpea brine, I figured the best way to test it was with a fool-proof Vegan Chocolate Mousse to avert any potential disasters. Initially, as I stared into my bowl of murky chickpea water, I wasn’t entirely convinced that the Aquafaba would turn into fluffy meringue – but I soldiered on. To my surprise, after whisking the living sh!t out of the Aquafaba, it really did resemble meringue. (Don’t try tasting it on it’s own though… it’s gross).

But of course, me being me, I somehow ended f*cking things up by trying to use the traditional method of slackening chocolate with a small amount of meringue before folding it in. Doing that just made my melted chocolate seize up into a ball that resembled a turd. Beautiful. I guess traditional methods don’t work with un-traditional ingredients.

I tried making it again the next day, sans initial error, and it turned out pretty awesome. Super airy and creamy, you’d never believe no egg whites, cream, gelatin, nuts, oil or avocado went into this Vegan Chocolate Mousse. Oh, and don’t worry, you won’t be able to taste any beans or chickpeas either. Be sure to buy the best quality chocolate when making this recipe, because there are so few ingredients used in the recipe – you want them all to be top notch stuff! (As it always should be, duh!).

I’ll leave you with the recipe for my adaptation of Miriam’s Vegan Chocolate Mousse. (In my version, I add a few other ingredients and use a little less chocolate to make a softer, more traditional mousse. I also top mine with raspberries and spun sugar, just because I can!). I hope you try it out because it is deeeeee-licious. P.S.: I’m going to continue experimenting with Aquafaba in the coming weeks – so feel free to share your experiences with it in our comment box. Adios! 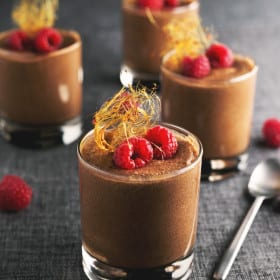 Adapted off Miriam's Blog
Tried this recipe?Let us know how it was!