This vegan paella is an authentic Spanish dish loaded with fresh vegetables and plenty of saffron! Ready in minutes and so delicious!

When it comes to delicious international vegan dinners, my favorite would have to be a paella!

Vegan paella is a super tasty recipe to make if you’re a vegetarian or on a vegan diet. This vegan version of the famous Spanish paella is a meat-less one-pot recipe that won’t disappoint your taste buds.

Paella is a Spanish dish that is considered one of the best dishes in Spanish cuisine. For non-Spaniards, it’s the national dish of Spain, but for Spaniards, it’s a dish that belongs to the Valencian region of Spain.

Paella gets its name from a Valencian word derived from a Latin term which means “pan.” It’s called this because Valencian paella is cooked and served in a big shallow pan. The primary ingredients of paella include rice, saffron, chicken, and seafood.

What goes in a vegan paella?

How do you make vegan paella?

Once you get all the ingredients for vegan paella, follow the simple steps below to make this delicious paella recipe.

Start with adding vegetable stock and saffron threads in a saucepan and boil at high flame. When bubbles appear, reduce the flame and cook at low heat. In a paella pan, add olive oil or any other oil as per your choice. Add onion, red and yellow pepper, and stir-fry until softened. Once done, add mushrooms and garlic and sauté them for at least 5 minutes. Season with salt and pepper according to your taste.

Add Bomba rice, tomato, and smoked paprika a mix all the ingredients properly. Adjust the heat to medium-low and wait to add one-third of saffron-filled stock until liquid starts getting absorbed. Cook the paella for some time without covering the pan. Then gradually add the remaining vegetable stock when the liquid is almost absorbed. Allow the paella to cook for 5 to 10 minutes.

In the end, add peas and artichoke hearts to paella and cover with tin foil. Cook, it covered for 10-12 minutes, and then turn off the heat. Don’t uncover the paella pan 10 minutes after turning off the heat. After 10 minutes, remove the foil, garnish paella with parsley, and your vegan paella is ready to serve.

What kind of rice do I need for a vegan paella?

Bomba rice is the best option because it’s excellent at absorbing flavors. It doesn’t stick together, even if you cook them a bit longer than usual. So, your paella looks really nice instead of becoming spongy, which can happen with other rice.

However, it’s possible that you don’t get Bomba rice. In that case, you’ll need a substitute for Bomba rice for your vegan paella. Some of the best replacements for Bomba rice are Risotto (Arborio rice), Senia, and Bahia rice.

Do you need to use a paella pan to make this dish?

No, it’s not mandatory to use a paella pan to make this dish. You can cook this dish in different pans and pots. However, you must ensure that the pot is wide and have enough space to cook the rice evenly. Generally, a 12–14-inch frying pan or skillet will be a good alternative.

Paella pans are typically made of two types- carbon steel and enamel. But the regular pots used in homes are primarily stainless steel or cast iron. So, you have to keep in mind that there will be some cooking differences. In terms of the material of the pan, here are some of the best replacements for paella pans:

Tips and tricks to get the best taste of vegan paella

How do you store paella?

Unlike seafood paella, vegan paella can be stored in the fridge for 4-5 days or up to a week. Always use sealed containers to keep the paella as fresh and moist as possible.

Can you freeze paella?

Yes, you can freeze paella without affecting the flavor. However, once you defrost it after freezing, the rice can become a bit spongy. 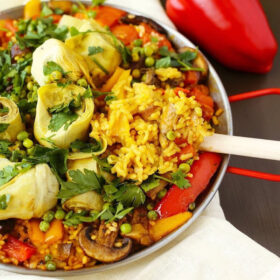 STORAGE TIPS Unlike seafood paella, vegan paella can be stored in the fridge for 4-5 days or up to a week. Always use sealed containers to keep the paella as fresh and moist as possible. FREEZING TIPS Yes, you can freeze paella without affecting the flavor. However, once you defrost it after freezing, the rice can become a bit spongy.