This vegan cream cheese is delicious, rich, and creamy. Made with just 1 ingredient, you’ll never use store-bought cream cheese ever again!

Since becoming vegan, I’ve started to make my own pantry basics instead of forking out tons of money for them.

What is vegan cream cheese?

It’s a dairy-free alternative to standard cream cheese. It can be used as a spread, in baking, or even eaten on its own.

We make our own because it’s:

What I love about this recipe is just how much it tastes like actual cream cheese! I love to spread it on a bagel or even use it in my homemade vegan cheesecakes!

As we mentioned earlier, there is just one ingredient needed. Choose a vegan yogurt that has no added sugar in it.

How to make vegan cream cheese

This recipe is very simple and mostly hands- off.

Place a strainer over a bowl before laying a coffee filter or cheesecloth on it that will separate the watery content and the yogurt. Now you have your filtration unit ready.

Add your vegan yogurt into the filter/cheesecloth and let it filter for 2-3 hours, or until the liquid has been removed and is now drained in the bowl.

With the water drained, lift up the cheesecloth from the strainer and empty the creamy yogurt cheese content into a container you want to store it in.

Like commercial cream cheese, it’s super easy to change up the flavor for some variety. Here are some ideas:

When stored in airtight containers and jars, this will last for up to a week.

Recipes to use this cream cheese

It’s not vegan friendly because it contains milk-based ingredients.

Which vegan cream cheese is best for baking?

The best options include miyoko’s dairy and Kite Hill.

What brands of cream cheese are vegan?

There are tons of brands, including Daiya, Miyoko’s, and Kite Hill. 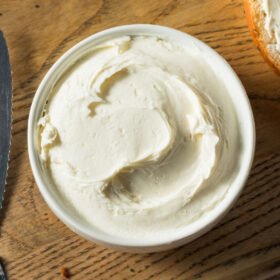 TO STORE: vegan cream cheese can be stored in the refrigerator, covered, for up to one week.